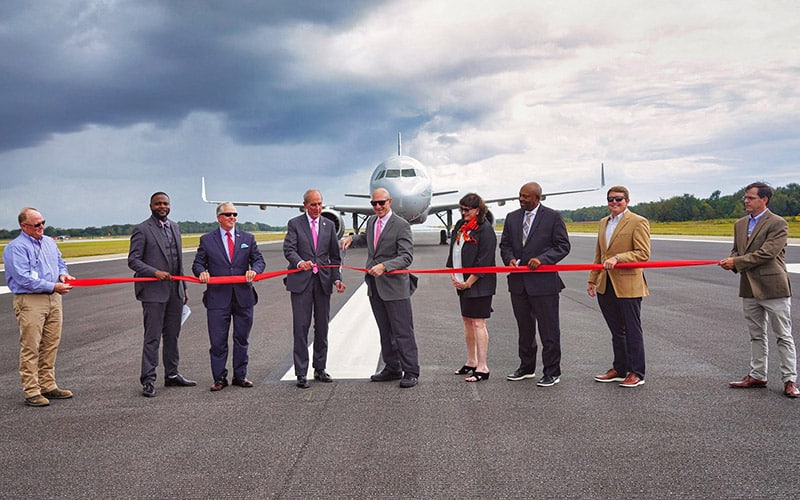 Mobile Downtown Airport’s longest runway is set to reopen after a $9-million rehabilitation, Business Alabama reports. Closed since May 10, the runway will be ready for the move of commercial air service to the airport by summer 2024. It was funded by Consolidated Appropriates Act of 2020 and Coronavirus Aid, Relief and Security Act funds. Work included more than 125,000 yd2 (19,000 T.) of asphalt runway mill and overlay; replacement of the centerline, touchdown zone lights and edge lighting; removal and replacement of all markings with reflective beads; and 100,000 yd2 of pavement grooving.

Additionally, the Mobile City County voted unanimously to authorize transferring $30 million in general fund reserves to provide a crucial local funding match toward the approximately $252-million airport project to move commercial service to the Mobile Aeroplex at Brookley, south of Downtown Mobile, AL.com reported. The move is the first financial commitment from a local governing body to the project. Mobile Mayor Sandy Stimpson said, “As the Mobile Airport Authority continues to lay the groundwork for moving the airport downtown, the city is prepared to help make this game-changing transition possible.” The council’s decision was the last major project voted on by three of its longest-serving members—Fred Richardson, Bess Rich and John Williams. All three outgoing council members voted in support of the financial transfer and praised the project for its potential in being an economic and cultural game changer for Downtown Mobile.